Guess what! It’s been WAY too long since our last post, so I’m going to change that.

In the past 4-5 months since you last heard from us, an extremely hectic and stressful college semester has come and gone and another one has begun. Luckily, I graduated in December and no longer have school to stress and worry about. Unfortunately, this is not the case for Woody and our other friends. (You’ll probably be seeing more posts from me for a while as the others finish up school this semester.)

Now, what else has happened?… Oh yeah! So back in September I applied for another College Program, got accepted in October, and rode Mission: Space for the first time in my life. Woody and I successfully ran our first runDisney race (Tower of Terror 10-Miler), dressed up for Mickey’s Not So Scary Halloween Party, and enjoyed Food and Wine Festival as 21-year-olds. 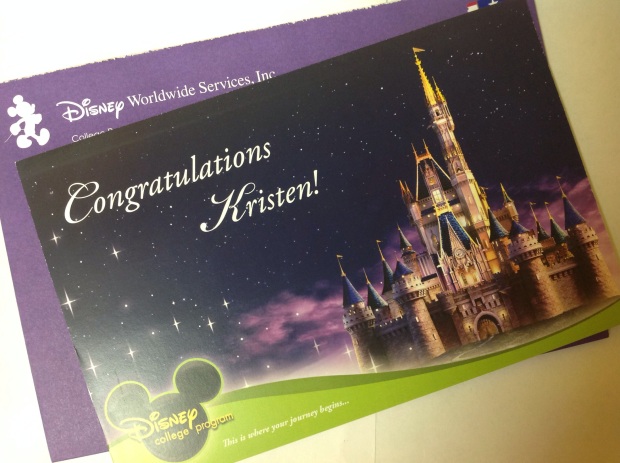 It’s hard to believe that starting in just 5 days my second college program, and the start of the rest of my life, begins. I cannot begin to describe my excitement for my role in Recreation this time around. If you’re reading this, I hope you will join me on this new adventure. I’m hoping to post once a week, maybe more depending on my work schedule, to keep the magic going. And you’ve probably noticed this already but the look of our page has changed. New adventure, new look!!

I am really looking forward to what the next 4 months have in store and I hope you come along for the ride!

For those interested in participating in the Disney College Program, Fall 2015 applications have gone live. Don’t miss out on this great opportunity and the experience of a lifetime, so click here to apply today! If you have any questions about the College Program, feel free to ask. 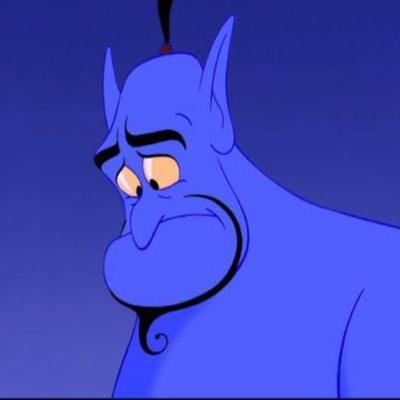 The world lost one of the greats today.  Actor, Robin Williams, has passed away at the young age of 63.  He     has brought large audiences so much laughter and happiness throughout his career in Hollywood.

Disney fans of many generations know him as the beloved character, Genie, from Aladdin (1992) and Aladdin and the King of Theives (1996).  Williams’ talent brought Genie to life and gave the movie a comical side, making Genie a fan favorite to all ages.

Robin Williams will be greatly missed by his friends, family, and fans.  His wide variety of acting credits make him known all over the country, as well as the world.  He brought so much talent into show business and will never be replaced.  We will continue to laugh along with his characters for many years to come.

We would like to send our condolences to Williams’ family during this very difficult time.

Now, what is “Planesing” you ask? Good question. I think I’ll leave it to the professionals from Disney’s newest film, “Planes: Fire and Rescue,” to explain.

Get the gist of it? From what I understand, you put both arms out like an airplane, take a picture or video of you doing something awesome in that position, and upload it to social media with #Planesing. You don’t have to go all Pocahontas with it and fly off a cliff but by all means, if you know what you’re doing, then go for it. It would make a pretty awesome video to watch. (I recommend cliff diving be left to the professionals or super daring, adventurous type.)

It seems that some pretty popular Disney characters have already mastered this concept. Will you be joining in on the fun and getting creative with your “planesing?”

We would love to know what your thoughts are about this new concept that could be taking over social media sites very soon. Leave us a comment and have a chat with us!

(This is an article I found, written by Amy Ziese.  It was posted on ThemeParkTourist.com.  We did not write this and do not take credit for it.)

Working as a Cast Member helps you hone some unusual skills you might not get anywhere else.

Every Disney Cast Member learns the basics of doing the Disney point, navigating the parks, and interacting with guests during their training. However, there are many other skills that Cast Members tend to pick up on the job. Things you might not consider to be terribly useful in everyday life often turn out to be very handy when you’re dealing with thousands of theme park guests on a daily basis. Here are some of the stranger things that Cast Members often learn to do.

Cast Members who work on rides with a motion sickness warning tend to hone this skill particularly well, but the ever-present heat and humidity in Florida can make guests green at the gills just about anywhere. After a few months on the job, Cast Members learn to spot that glassy-eyed look even from a distance. You always hope you can get to the guest before he has a hand over his mouth, so there’s at least a chance of getting him to a bathroom in time.

8. Judge Children’s Heights at a Glance

Any Cast Member who has worked at an attraction with a height restriction is sure to have a special talent for identifying children who fall under that height. Cast Members typically figure out where the height restriction falls on their own body. That way you know any child who comes past your waist is good to go, while those who are mid-thigh definitely need to be measured. This skill is handy on the job, but awkward when you unconsciously eye up the kids in line with you when you’re riding attractions in your off time.

7. Determine Nationality in Under a Minute

Cast Members get to meet guests from all over the world. After you’ve had some experience chatting up international visitors, you’ll notice some commonalities in dress and mannerisms. This skill has nothing to do with determining someone’s heritage, so skin color and facial features don’t really apply. However, you can usually tell from someone’s choice of clothing or footwear where they’re from. If you can’t guess before talking to them, you’re sure to figure it out after you’ve heard their accent. Non-English speakers also seem to know certain English words that change depending on where they’re from.

6. Figure the Time Based on the Sound of Fireworks in the Distance

Walt Disney World has at least three fireworks shows every night of the year. In certain spots on property, you can even hear more than one. Cast Members can often ditch the watch in the evenings and determine the time by figuring that the wind is carrying the sound of Illuminations over from Epcot, so it must be nine. Unfortunately there aren’t many practical applications for this, so you just look a little strange cocking your head to one side and mumbling “ah, nine o’clock.”

5. Understand the Unique Language of Kids

If you’ve spent much time around small children, you’ve probably recognized that there are many things only parents seem to understand. What’s gibberish to an outsider often makes perfect sense to Mom or Dad…or to a seasoned Cast Member. The more popular words like characters’ names and certain attractions are easiest to pick out. The best Cast Members also know how to communicate with tots right on their level as well.

4. Count the Number of People in a Group in Seconds

Sure, you always ask “how many,” but you also go into the grouper position knowing that a lot of people will get the answer wrong. Guests also like to answer with math problems, like “two here, and three behind me, and then a kid.” Needless to say, it’s handy to have a good eye for figuring out which groups are together and determining how many are really with the guest in question.

3. Guess What a Guest Will Ask Before he Gets the Question Out

In certain positions, a Cast Member’s whole job is to answer questions. Cast Members in guest relations, the greeter position of an attraction, front desk areas in the hotels, or stocking shelves in a gift shop tend to get lots and lots of questions. After a while you pick up on what the guest is asking long before the question makes its way out. This is especially useful in cases where the guest himself doesn’t actually know what he’s asking. The literal answer to “Where’s Disney World?” is “Right here…all around you…you’re IN IT.” But most guests are actually referring to the Magic Kingdom when they ask this, which changes things drastically.

Cast Members love acronyms, particularly those with three letters. Many popular acronyms assume the word “ride” is tacked on to the end of an attraction to get the right number of letters. Disney’s Animal Kingdom is “DAK” (pronounced like it rhymes with “pack”). Kilimanjaro Safaris is KSR, Dinosaur is DTR (adding “The” as well as “Ride”), and The Great Movie Ride is GMR. Since these don’t make pronounceable words, you just say the letters. If you work in the rotation that includes Aladdin, the Enchanted Tiki Room, and the Swiss Family Robinson Treehouse, you’re at ATT. String enough of these together and it’s almost incomprehensible to someone who’s not in the know.

1. Scoop Trash up Without Missing a Step

Picking up stray pieces of trash on the ground is an essential Cast Member skill that goes all the way back to Walt. The man behind the mouse was known to pick up litter in the streets of Disneyland to keep up the flawless appearance of his park. Naturally, Cast Members are expected to follow suit. This skill is really handy anywhere, but it does get you some strange looks from your friends when you keep falling behind at the mall because you’re reflexively picking up every crumpled napkin you see.

Useful or not, the skills and habits you pick up as a Cast Member are many. If you’ve been looking for an immersive way to pick up a few new talents it may be as simple as working for a mouse.

We all know that if you’re an avid Disney/Pixar movie fan you probably teared up at least once during Toy Story 3.  Maybe some of you even full-fledged cried your eyes out.  That’s okay! You’re not alone.  Trust me.

The Disney Parks Blog posted this chart (which must mean you aren’t alone, right?) on just how much different parts of the movie made people weep. 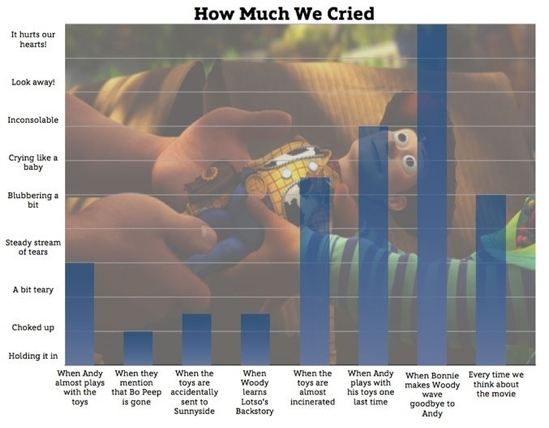 I can vouch for the parts “When Andy plays with his toys one last time” and “When Bonnie makes Woody wave goodbye to Andy” for being the most heartbreaking parts of the movie.  I’m not one to cry during movies but this movie hit me hard.  Maybe it was just because it came out the summer I was going to be heading off to college for the first time, myself.  I literally grew up with Andy and the toys and the whole movie was so relatable to my life.

Do agree with this chart? What part(s) made you cry? We would love to know! °o°